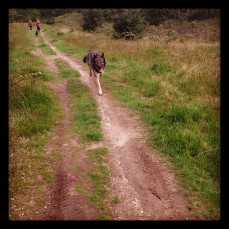 Lord Tyee on the trail.

I thought my divorce had gotten rid of the ambulance chaser in my life—until Sunday night.

Lord Tyee has improved his road manners so much that I believed, on that rainy evening, that he would execute a perfect, sinless walk. He didn’t even try to cross the street before we reached the crosswalk (the recognition of white lines on pavement being a phenomenon I’ve been bringing to his attention for some time).

Then, just as we turned smartly to the left to cross, along came an ambulance.  No strobing lights, no siren—just an ambulance ambling in the direction of the hospital.

Something there is that does not like an ambulance. And that is Lord Tyee, who, with a peremptory bark—or was it a huff? a snort?—thrust his entire being into the chase, flinging me into the middle of next week via my left hand.

“D. F.,” I said, that being my affectionate name for my 125-pound familiar whenever he apparently tries to kill me, “Leave it!”

To his doggone credit, he left off chasing immediately. A split second later, he gave me the where’s-my-treat? look.

I gave him a tiny one along with my top-level baleful glare. “That was not fair. I was holding the leash properly.” (Properly meaning, the left hand holds the part of the leash nearer the canine, fingers curled down over the leash, hand held even with said canine’s neck, so that the slightest lateral interspecies signal is correctly and swiftly transmitted.) “You have hurt my left hand again, not to mention that once again you have proven yourself a Champion Idiot in traffic management.”

Lord Tyee seemed to think this an accomplishment. His plumy wolfish tail waved as he cast a significant glance toward my bag, where the treats reside. I ignored him, grumbling about the two broken fingers and one broken foot I’ve put up with thanks to Lord Tyee’s magnificent leaps to the left, which is apparently where his destiny lurks. “Three bones down, 203 to go, D.F.”

Lord Tyee has his own bag or tricks. These little treats are tasty—you should try them—and he was determined to snag one more. Luck was with him. A lady came running down the opposite side of the street, a dog leashed to her wrist.  You guessed it: suddenly His Exuberance flung his entire being to the right, which, since he was attached via the leash to my left hand, had the interesting effect of spinning me around rather more quickly than I might have accomplished such a maneuver without his help.

He did. “Treat-treat?” said those big golden eyes.

Yup. He got another one. 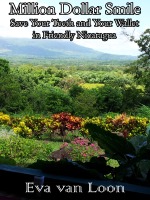